Singularities are dense structures of technological rhetoric: apex points wherein the idea of what it is to be human and the distance that we imagine that we have from our instruments compress into a mystical union.

The notion of human intelligence and consciousness have drawn back behind their barricades, over the period that used to be called the information technology revolution, to a point that what we are becomes increasingly a description of what machines cannot do. We paint ourselves into a corner in our insistence that our utilitarian inorganic twin is any less human than us. We invent our technologies and thereafter they invent us.

Within the intense gravity zone of this technological confidence, this eschatological sense of progress is a black hole; an oppressive regime which threatens our sense of self, which was always a froth of barely recalled madeleines in any case. The demiurgic ego of the singularity permits no gods beyond itself. Within its parochial zone of authority it defines the transfinite expanse of the horizon. Its impending hubris is palpable.

We must accelerate through the eye of the needle. The nul point transcended, we will find new adventures amongst vistas that are not vistas.

I know it’s sometimes difficult to not be That Guy, but whenever you avoid it does it mean that another guy has to be That Guy? And how does it happen that That Guy will then inevitably manifest far too close to you? Is it a form of transmigration?

In this case shd you be That Guy so that the other guy doesn’t have to be That Guy? In effect running interference for them and thereby proving that That Guy can be the guy to be.

Morelli claimed that personality in art is found “where effort is weakest”. These weaknesses turn into habitual tics of style, that holy grail of individualism, if untreated. This is not to say that these lapses in effort will be visible in the work itself, they may manifest in composition, in conception or in choice of subject. This quaintness expresses a vulnerability which is appealing to audiences and, when it is copied thoughtlessly or cynically, may develop into a trope.

The tropes are different from the genres, in that genres are merely rich seams in the market where prospectors gather, while tropes are a weakness, not so much in the artist as in the critical faculties of the audience.

In the age of mass media, where art is disseminated as consolation, this sort of laziness keeps culture unthreatening, undemanding and in the end unsatisfying.

“What do they call you, stranger?”

“In pizzerias I am called man, but in fried chicken shops they call me brother.”

“And what is it, Brother of Man, that they call you in the kebab shop?”

“Ah, it is there that they call me friend!” 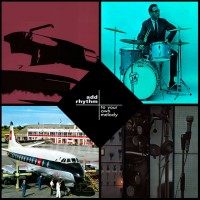 7 the Harrow based Ad Rhythm Records put out its first three 7 inch singles, entitled Add Rhythm. Rather than featuring complete songs, each of them contained four drum rhythms; two on each side for musicians to “Add Rhythm to your own melody”. The three singles, entitled Dance Time, Pop Time and Latin Time, are a unique example of technological repurposing; it was no longer your gramophone it was now, “the most effective practice aid a musician ever had”.

In August 2013, I found two of the Add Rhythm 7 inches in a Red Cross charity shop in Hendon. Taking the Add Rhythm singles home two things became apparent: firstly that these rhythms were entirely usable, and secondly that they represented ancestral missing links in the technologies of break beats and sampling. I resolved to use them for my own recordings, but then as I showed off my newly won treasures online, I had a bigger idea: I thought that it would be better if *lots* of people used them for recording.

By the 30th September I had received twenty-seven recordings from the contributors. Over two thirds of the original applications. I was astounded both by the quality and the range of material on these recordings. Certainly I expected some of the playful noise-based reactions to the rhythms but there were a wide range of musical responses using a variety of techniques and even a pleasing array of songs. With most tracks ranging between three to three and a half minutes, the resultant feast is more like a mouthwatering selection of tapas than a stodgy diet of carbohydrates.

One is encouraged to collect second hand opinions, preferences for one luxury product over another, territorial loyalties of place or race or gang, memories of briefly-visited locations abroad, stockpiled media products and the like, and collage them together into a persona and say, “this is what I am. This is me and not you.”

So, one might ask, what are we really? We are an arbitrary awareness of the present carried through time, running on a substrate of organic bricolage rising from base matter into a pyramid of increasingly complex structures which feels itself to be a unified body distinct but utterly dependent upon a temporary support environment that hurtles from one near collision to another.

The self is a tap dancer on the night bus.

Tempted to start writing a fat fantasy triple-decker called Swords of the Glamping. It will concern a clan of warriors who invest their assets in a yurt resort with breathtaking views over “fissures like broken jawbones of fallen gods” and “lofty spires, seemingly without summit thrust high into the frozen cloudscape”. Trouble starts when the cleaning contractors refuse to bow to their liege-lord because he’s a prat with bad personal hygiene and a stupid mullet. After that there are dragons and all of that shit you’re into.